The other day there was an article on BBC ‘Counterfeit drugs: ‘People are dying every day” about counterfeit medicines snuffing out 120,000 lives every year across Africa because of fake anti-malarial drugs. Reading through it, despair turns into hope when presented with use cases on the application of Connected Technology in making real and significant difference in fighting counterfeit to safeguard health. The implications thereof are not only limited to Africa, but the world over, where billions fall victim to counterfeit medicines, and unsafe food, sometimes resulting from adulteration, and at other, from ignorance and criminal negligence.

While IoT is still gaining momentum and growing leaps and bounds through hype around launches in the consumer electronics sector (smart TV, fridge, ovens, washing machine, or in short ‘smart homes’), a big turnaround in its application through mass integration in the food and pharmaceuticals sector maybe just around the corner. And when it gains momentum, an IoT revolution will emerge to bring revolutions of every colour (green, white, blue, red, among others) full circle to truly connect and consolidate their achievements.

Given the magnitude of the problem, anti-counterfeit industry is already registering double digit growth. A multitude of track & trace and authentication solution providers (like Sproxil, Authenticateit, Thinfilm, PharmaSecure, Winsafe, NXP, ScanTrust, Italcheck, among others, using Alphanumeric and Data matrix, NFC, Image recognition based integration) are entering the market space with sensor technology and mobile applications on Android and iOS operating systems available through Google Play and App Store, respectively. Check My Meds from EMD Serrono is also a similar app that allows scanning of two dimensional barcode to authenticate medicines from the company.

While counterfeit certainly remains a major area of focus where companies like Alibaba have spent more than $160m fighting fake goods on its websites from the beginning of 2013 to November 2014, another area where connected technology could make significant inroads is in temperature controlled supply chains (cold chains).

Connected production systems, supply chains, to retailed products on supermarket or pharmacy shelves, could revolutionize Consumer Health Protection worldwide by resetting the applicable standards. This would also have enormous and directly measurable economic benefits as wastage and health hazards through improper handling and storage can be eliminated for medicines to work as intended, and food borne pathogens checked to fight more than 200 preventable diseases which affects 600 million causing 420,000 deaths every year.

According to the United Nations Department of Economic and Social Affairs (UNDESA): ‘Roughly 30% of the food produced worldwide – about 1.3 billion tons – is lost or wasted every year, which means that the water used to produce it is also wasted. Agricultural products move along extensive value chains and pass through many hands – farmers, transporters, store keepers, food processors, shopkeepers and consumers – as it travels from field to fork.’

However, for this technology to become widespread and a categorical feature of product design, particularly in perishable goods (from a pack of milk or bread, a bag of flour, box of eggs, a vial of vaccine injected into an infant, to a bottle of cough syrup purchased over the counter at a local pharmacy) great policy and commercial emphasis needs to be placed on developing miniaturized, cheap and mass produced sensors and tags and their efficient tracking mechanism. With 7.85B mobile connections compared to 7.45B people worldwide, we are sitting on the cusp of another revolution in human history, but one that is not based on disruption, but restoration of trust in quality and affordability of the basic necessities of life. 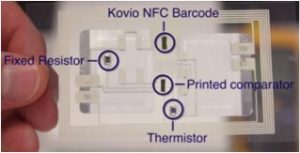 Before wrapping up, ending this piece by only talking about great opportunities and none of the associated challenges would make it look like a marketing propaganda for IoT. But, this is not the case.

With every opportunity comes challenges. Among others, one that we will be confronted with first and foremost is the data tsunami. While businesses are still working towards developing a clear framework for Data Wisdom to make sense of all data being generated by IoT from connected devices around the house or certain high end consumer goods, we are actually only scratching the surface. If connected food and drugs, using printed RFID technology, were to be thrown into this mix, it would torpedo and wipe out all existing Data Management solutions, no matter how big or how powerful they are! In a scenario like this, we will have to completely rethink and design de novo solutions for Data Analysis to be carried out on the fly rather than stashing it away in some cloud for later use, if at all.  Artificial Intelligence can certainly come to our rescue.

We will dedicate a forthcoming article of how Data Technology and AI can be used in this context to prevent indigestion (of Data, of course!).